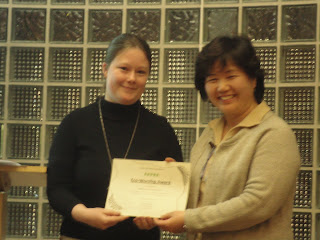 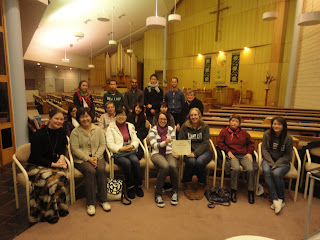 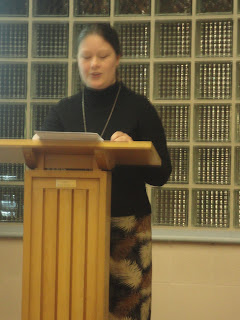 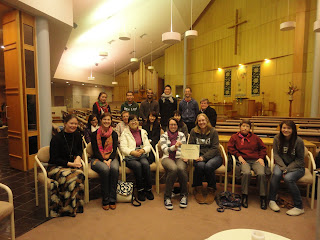 Canberra City Uniting Church was honoured for their environmental focus on Sunday with the presentation of a Five Leaf Eco-Award in the category of Eco-Worship.
The Five Leaf Eco-Awards are an ecumenical environmental change program targeting religious institutions, a part of the community that has been largely overlooked by the greater environmental movement. The awards are based on the creation care concept, which treats care for the environment as a basic tenant of religious faith. Armed with this message, the Five Leaf Eco-Awards assist churches in fulfilling set goals related to sustainability and community awareness of environmental issues. Canberra City Uniting Church are the sixth church in Australia, and the first in the ACT, to receive this prestigious award..
The award was presented during the congregation's City at Night service  in order to to acknowledge the particular dedication of this congregation to caring for the environment. This has included participation in a range of working bees that conducted weeding and established an environmental resource room at the Greenhills Centre on Cotter Road and holding discussions on issues around ecological footprints, greening the church and responses to the disappointment felt by many after the  perceived failure of the Copenhagen climate change summit last year. Some members of this congregation are also part of the church’s newly established student house, which was recently energy audited to help its residents live as sustainably as possible.
Rev. Myung Hwa Park accepted the award on behalf of the church. Rev. Park, who trained in eco-theology while living in Ireland and was one of the driving forces behind the campaign for the award, was very proud to see the church recognised.  "Receiving this award makes us feel even more committed to caring for the environmnet, which I see as a crucial responsibility for modern Christians,” Rev. Park said. She is already working on what they can do next, with a Cupcake Day event to raise money for the RSPCA being planned for a City at Night service later this year.
Five Leaf Eco-Awards Director and Canberra resident Jessica Morthorpe, who was there to personally present the award, said she was hopeful that Rev. Park and the Canberra City Uniting congregations would inspire other local churches to get involved in the program. Ms. Morthorpe said, "The word is slowly getting out, currently we have 15 churches nationwide involved in the program, as well as many more who have expressed their interest.
“There are lots of churches out there doing things for the environment that deserve recognition and many others who want to do something but are not sure where to start or need some support and advice. I want to encourage those churches to get involved in the Five Leaf Eco-Awards. In particular, I hope that this award presentation will bring the Five Leaf Eco-Awards to the attention of churches in the ACT region. The awards are based here, so churches in Canberra have the opportunity to invite personal involvement from myself, as well as the existing benefits of being involved in the program.”
For more information on the Five Leaf Eco-Awards visit http://greenchurch.victas.uca.org.au/what-are-churches-doing/five-leaf-eco-awards/ or check out Jessica’s blog at fiveleaf-crownofthorns.blogspot.com.
Image caption: From left: Five Leaf Eco-Awards Director Jessica Morthorpe, Rev. Myung Hwa Park and the City at Night congregation with the church's Eco Worship Award. Image supplied by the Five Leaf Eco-Awards.
Posted by Jessica at 12:52 PM

Important Lessons from the Bible

Why Jesus came:
"that the world might be saved through him"
John 3:17

Who Jesus is going to use to save the world:
"For the creation waits with eager longing for the revealing of the sons of God."
Romans 8:19

Our role on earth:
"The LORD God put the man in the Garden of Eden to take care of it and to look after it."
Genesis 2:15

The Five Pillars of A Christian Theology of Sustainability

1. God is the creator, sustainer and redeemer of creation.

2. Covenantal Stewardship (we have a covenant with God as stewards of the earth).

3. The creation-fall-redemption paradigm (God made a good world; human failure broke the relationships between god, man and creation; Christ provides hope for all creation).

4.Bodily resurrection(we will rise with bodies, not as spirits)

5.New Creation (a new Heaven and new Earth refers to a renewal and an earthing of heaven, not starting over).

Adapted from When Enough is Enough: A Christian Framework for Environmental Sustainability, Edited by R.J. Berry, Published by Inter-Varsity Press, 2007, Nottingham p43+

Jessica
Australia
I am a 22 year old Christian Environmentalist who runs an ecumenical church greening awards program called the Five Leaf Eco-Awards. Through this program I work with churches to help them become more environmentally friendly and to overcome the barriers which have slowed the adoption of creation care practices in churches around Australia. Some days I hear fantastic stories about what churches are doing and it warms my heart, other days I feel like I'm banging my head against a brick wall. I have no formal training in theology, but I do have a great love for the Bible, and I believe that God's spirit is calling us to a fresh look at what His Word says and means in terms of the environment and how we, as humans, relate to it. When I'm not working for Five Leaf I am a university student studing environmental science and marketing. Many people find this combination of science and commerce quite strange which amuses me. I think if I was doing physics or chemistry it would be perfectly normal... the zoology is a bit more different. It is interesting at times though, because I often see both sides of things and I know how the 'enemy' thinks.

Some information about the program I run:

The Five Leaf Eco-Awards are an ecumenical awards program for Australian churches and religious bodies that provides recognition for their environmental achievements.

Currently the program has pilots running in Melbourne, Sydney and Canberra and we are seeking more churches to participate.

The Five Leaf Eco-Awards encourage faith communities to be more efficient in helping the environment and to play a more effective role in social change towards sustainability. It provides examples of what is possible, and a framework of steps to work towards and to allow comparison with other communities to enable exchange of knowledge and experiences.

The program aims to:
- Make ecologically friendly churches the norm
- Provide support to evolving eco- churches
- Provide a system that is flexible enough to allow and encourage creative approaches and extensions of the basic program.
- Encourage fellowship by providing a common goal with reachable targets and recognisable achievement.

After the Basic Certificate, the program has five levels or 'leaves' of awards. The first four leaves can be achieved by completing the requirements of any of the first four categories: Sustainable Church buildings/property, Green Worship and
Mission, Ecological Congregation, and Ecological Outreach. The final level, Five Leaf, extends and challenges the church
community to become a 'Green Church' in the sense of being environmentally friendly over these categories, demonstrating positive influence in the wider community for sustainability, and showing constant improvement of environmental practices.

“To bring people closer to God by bringing them into a right and faithful relationship with creation as its appointed stewards.”

For more information on how one church earnt the Five Leaf Eco-Awards Basic Certificate see:
http://fiveleaf-crownofthorns.blogspot.com/2009/02/example-of-five-leaf-eco-awards-basic.html
or
http://victas.uca.org.au/green-church/awards

Why doesn't your church go green?

Join me in completing the Green Bible Challenge! Grab your study Bible and a second hand Bible from your local op-shop. Then follow me as I read through the Bible, highlighting (in both Bibles using green) any passages relevant to creation and its relationship to God and man.

When we finish you will have two Eco-Study Bibles. One for you, and one for your church. Stun your congregation with over a thousand verses about the earth - almost double the verses that relate to heaven or love.

The purpose of this blog is to help equip you as Christian Environmentalists so you can green your church, life and local community. Time is short for creation, so start today!

we are in
AustralianPlanet
australia's search engine